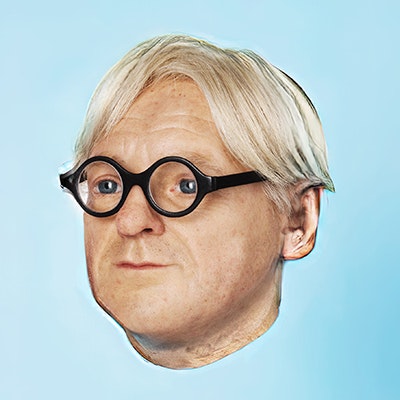 To cut a long story short, your personal Death Clock NFT means to end you. Propelled by incorruptible block-time it places a number on your head. Or in your head, really. Installed there, this self-fulfilling numeric prophecy is grave and quite inescapable. Consider the following as a practical and philosophical guide to Death Clock ownership. A friendly warning, if you will.

Death Clock is an edition of (initially) 500 NFTs by the DIS collective. Each one counts down to its owner’s demise. On the face of it, Death Clock sports your typical post-internet presentational wrappings: fatalistic memes, deathly historical references and queasy graphic design. At the project’s minting website (black, blood red, and brown bile), a questionnaire flippantly enquires your age, your weekly screen-time, and how often you floss your teeth. Your responses are algorithmically processed to compose the artefact itself, your personalised Death Clock web app. The workings of this algorithm are not particularly mysterious. A little randomising around average life expectancy is all it takes. My Death Clock has me signing off one fine day in 2097, at 10:32:22 AM precisely. Avoiding the revolting aesthetics of the internet’s sincere death-drive subcultures, this is sanitised and ironised morbidity for web3 LOLs.

But not the number. The number is no joke. Beneath Death Clock’s macabre-lite facade is a hyperstitional instrument, deadly accurate down to the second. The very existence of this number has already initiated a feedback process between the immutability of its ledger entry on the Ethereum blockchain and your helplessly suggestible human brain. This process is vague and vaguely amusing now, but promises to be self-tuning, self-tightening, and ultimately unstoppable. Want out? Impossible. Your Death Clock is permanently bound to you. Soulbound would be a euphemistic way to put it. Even if you transfer it to another Ethereum address it will leave behind a Remnant. Of course they thought of that, deadweight.

Death Clocks display calendar time — years, months, days, hours, minutes, seconds (not milliseconds, death is no sport) — but they allude to block-time. Block-time, the decentralised, consensual measure of successive transactions on a blockchain’s ledger, eliminates the astrological vagaries of the Gregorian calendar that tripped up Nostradamus († 2 July, 1566), and others of DIS’s doomsaying forebears. Block-time does not care about time zones, hemispheres, nor planetary orbits. It is not cyclical, nor is it relatable by metaphor to any living thing or process. Human not grok blok klok. Block-time is artificial time. Ultimate time. Time ultimatum full stop. Pure number. Nick Land (), the unconscionable countdown-peddler of our time, prefaces his enraptured treatise on blockchain technology by invoking the mathematician Kurt Gödel († 14 January, 1978): “Since Gödel we have known that whatever can be known at all is precisely detailed in some yet-unknown number.”

That’s the preamble done, I hope it didn’t take up too much of your precious time. Now, let’s begin this Death Clock owner’s guide proper with a participatory exercise. Something physical to get the blood pumping! We will try to escape calendar time — albeit only figuratively — and make experiential contact with the sheer inhumanity of block-time. You are to perform the following actions. Go to a public place. Ideally a place where you can be seen but your presence will not immediately draw attention. The steps to a museum or library would be perfect. Take a seat. Place your phone discretely on the step next to you and start a stopwatch running. Now begin to log your micro-movements.

[00:00:00] Blink twice. Glance over your right shoulder. Retrieve the copy of Memento Mori by Muriel Spark from your bag with your right hand. Close bag, take book in both hands and begin reading from the top of page 119, silently mouthing the words as you read.

[00:01:29] Sniff, sniff ... sigh, lick your lips, glance up from the page, back down to the page, cross your legs and continue reading. Look genuinely aghast as Charmian answers the telephone and hears those fateful words. Eyes up from the page, try to make eye contact with a stranger as you repeat the words.

[00:03:11] Stare aimlessly at a nearby object with a troubled expression. Scratch the back of your head with the first three fingers of your left hand while keeping your place in the book with your right hand palm down. Pick your nose.

Make this pantomine as perversely normal as possible. What matters is the number. Doing it by the number. [00:07:29] End. Alright, let’s call it a day. Don’t worry if you didn’t perfectly memorise the sequence. That’ll come with a few day’s practice. That’s right: on the following morning you are to come to precisely the same spot again, at precisely the same time, wearing precisely the same clothing, and repeat precisely the same timed sequence of micro-movements. For what purpose, you ask?! We are, in fact, trying to catch an innocent passerby in the fly trap of block-time. If someone from the day before happens to see you ... Someone whose daily routine happens to bring them to this place at exactly this time ... And if that poor someone happens to see you there ... Like a looping GIF IRL ... Well, it might poke a hole in that someone’s carefully maintained little reality. Might glitch their simulation ... If you can sneak a glance at their expression in that moment ... that look, that appalling horror, that’s the face of artificial time.

Alain Robbe-Grillet’s († 18 February, 2008) hyperstitional novel The Erasers is required reading for Death Clock owners. In an unnamed French town an unidentified anarchist organisation has carried out a murder at precisely the same time, 1930, on each of the previous seven evenings. I know, very Death Clock, right? Such calculated malice is too much for the local police force and so an out-of-towner, a Detective Wallas from the Bureau of Investigation, has arrived to take charge. To piece together events. We readers are immediately let into the novel’s secret: the most recent murder, that which finally caused Wallas to be brought in, never actually happened. The killing was botched and its intended victim, a Professor Dupont, escaped — disappeared — concealing his survival in order to protect himself from further attempts on his life. Wallas, though, does not know this. He sets about his detective work with intent. To piece together events. He spends a wintry day criss-crossing town, conducting interviews and inspecting significant locations. He hears contradictory accounts. He notices inconsistencies in the evidence. He finds striking coincidences. One witness believes Wallas himself is the stranger who she saw near the murder scene the previous evening. Impossible, he had been hundreds of miles away. Wallas’s gun, it transpires, is loaded with bullets identical to those used by the killer. An awkward interaction with the local police chief ensues, but it’s really nothing more than a distraction. Robbe-Grillet’s intricate clockwork movement is turning towards its unstoppable, hyperstitional conclusion.

Hyperstition? Hyperstition is more than superstition. Hyperstition is the process by which the thinking of something incontrovertibly causes that thing to happen. To piece together events. The case’s contradictions, inconsistencies, and coincidences are producing a dizzying feedback in Wallas’s thinking, directing him toward a radical hypothesis. What if, indeed, the murder attempt had failed ... And what if the killer has also come, after the fact, to the same realisation ... This realisation might lead the killer to return to the scene to complete the job! By now it is 1900 and Wallas is heading urgently back to the victim’s residence. He finds the place dark and empty. Wallas is in the second floor room where the attempted murder took place when he hears someone coming up the stairs. The killer, Wallas intuits. Wallas hides. Wallas waits. In silence. The door opens. A man with a gun enters. Wallas shoots, instinctively. Hyperstition occurs. A fatal shot. But the man Wallas has killed is not the killer. It is the killer’s intended victim. It is Dupont. Dupont had waited until dark to sneak back into his home and retrieve some of his possessions. The time is 1930. Detective Wallas ... has murdered ... the victim.

From your hyperstition-bound perspective, as a Death Clock owner, the name of the anarchist organisation in The Erasers might as well be DIS. You are Wallas, and your Death Clock is counting down to 1930. Anything you might do to avoid the inevitable — however cautious, rational, sceptical, disbelieving, or preventative — will indeed prove futile. You are doing what your Death Clock wants at all times. Reading this text was perhaps not a good idea. These words are part of the conspiracy. Ignorance might have been easier on you. But it told you to, didn’t it. “Let’s take an interest in Death Clock commentary,” it said. You had better get out. But before you go, allow me to give you one crucial piece of Death Clock troubleshooting advice.

Let’s suppose, fantastically, that your Death Clock’s countdown reaches zero and you don’t die. It doesn’t go off, so to say. Won’t you be the smug one! But don’t be hasty. I mean, at that point it will essentially be an unexploded bomb, right? Keep what follows in mind. It is the year of our Lord, nineteen hundred and fifty four and social psychologist Leon Festinger († 11 February, 1989) has secretly inserted himself into an apocalyptic death cult calling themselves The Seekers. Festinger has targeted this particular cult because they have publicly stated the date and time at which their prophecy will occur. The cult is lead by Marian Keech († June 13, 1992), an otherwise quite ordinary American suburbanite who, via a bizarre extraterrestrial communication channel, has been informed that the earth is to be consumed by a biblical flood on December 21, 1954. Keech has assembled a group of wide-eyed and vulnerable followers (not through an NFT drop, but a humble newspaper advertisement), and preparations for the end times are well advanced. The Seekers’s energy is a contrarian mix of survival instinct and death-drive, laced with potent groupthink accelerant. Their feverish anticipation builds, until December 21 finally comes ... and goes. No flood. No ecstatic salvation. No consummation. The prophecy is objectively disproven and The Seekers must confront a different kind of world-shattering reality: their own collective delusion.

Except they don’t. No?! Never. Not for a moment. It goes exactly how Festinger knew it would. He hypothesised that, come December 22, The Seekers’s brains would be immediately forced to reconcile the cognitive dissonance of devoted belief and sudden disproof. Their very coherence of self would depend on it. And Festinger knew which of these competing realities would endure. When the countdown reached zero and the flood didn’t come, Marian Keech’s Death Clock cult did not abandon her. No, they doubled down, bullish. They were too exposed. Too bought in. Keep what follows in mind. They scrambled around looking for misinterpretations, calculation errors, and time-keeping ambiguities to explain the absent flood. They even went on recruiting new members! It is precisely this perversely faithful, pathetically human tendency that will enable Death Clocks to become the frighteningly economical instruments that they are. Their block-time immutability will definitively solve the timing problems that have historically compromised death prophesising. When its time comes, each Death Clock will autonomously execute its single, trustless transaction. Each will be an immaculate killing, unspoiled by errant assassins, suggestible detectives, and utterly impervious to disbelief. Death Clock will undoubtedly prove to be web3’s killer app.